Firstly, it is simple and convenient, as easy as:

Align, (park/position the car over the pad on the ground with help of visual aids)

Begin (initiate handshake protocol between vehicle and charging station including authorisation to charge, billing arrangements etc. via an app)

Secondly, it is fully contactless, drivers do not need to touch or manipulate charging cables, which is useful for fleet vehicles that may have multiple users in this post-COVID world, or for drivers with disabilities who may struggle to manoeuvre the cable into the correct position.

Thirdly, it is safe to use. The system will perform safety checks before charging starts and continuously monitor the process, terminating power transfer automatically if required due to breach of any safety parameters.

For fleet vehicles that may look to charge repeatedly and often, there is no threat from arcing/electric shock by repeatedly plugging and unplugging a charging cable. The removal of many cable mating cycles also helps with system reliability.

Fourthly, unlike plug-in charging, wireless is suitable for short opportunity charges when the vehicle is temporarily stationary which can extend battery range significantly.

Finally, the system can be used in all types of weather (and as previously mentioned, the driver doesn’t even have to leave the vehicle if they choose not to).

As AMiCC is not focused on technology development but on the demonstration of wireless charging, an existing commercial system was integrated within the project. The supplier selected by the AMiCC partners was Lumen Freedom with their 11 kW offering.

WMG at the University of Warwick will participate in the AMiCC case study with one trial vehicle – A Nissan Leaf N-Connecta 40 kWh. It will be used as a WMG pool car for transporting technical staff between the Main Campus and Wellesbourne Campuses. There will be one wireless charging station situated on the Main Campus in WMG’s Wireless Charging Demonstration Area outside the Energy Innovation Centre (EIC). The demonstration area has a wireless pad pit and test kiosk, which has been previously developed  with Energy Research Accelerator funding. In this project WMG has the support of its Facilities and Estates management, who work together with academic departments to use the campus as a ‘Living Lab’.

This demonstration will be complemented by WMG’s significant experience as one of the few UK-based institutions to have designed, developed and demonstrated proof-of-concept wireless systems. WMG is actively working on a number of other projects with different industrial partners to facilitate the creation of a UK-based wireless EV charging supply chain.

In this AMiCC demonstration, WMG’s previous experience and knowledge will significantly facilitate the installation, testing, use, monitoring and evaluation of this commercial system and its user advantages. It will be used over the course of several months to collect data from usage of the system with a view to demonstrating how wireless charging could be a route for fleet vehicles to go electric and help support the drive for carbon neutrality by 2030.

Project AMiCC is supported by Innovate UK and funded by the Office for Zero Emission Vehicles (OZEV) as part of the On-Street, Wireless, and Catalysing Green Innovation Programme. With this initiative, OZEV has invested £50m in transformative R&D that puts the UK at the forefront of zero emission transport to help deliver on the UK’s decarbonisation goals and to anchor economic growth. 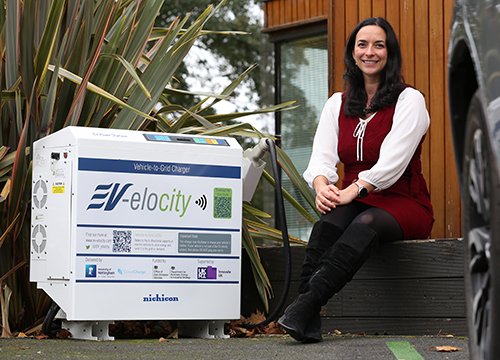